It’s a breezy Wednesday morning on the southwest side of Tallahassee, and a cool, spring wind is wisping through the trees and slender path that winds through the gentle hills of Jake Gaither Golf Course.

Recently the City of Tallahassee and the State of Florida have requested recognition of the nine-hole course through an application made to the National Register of Historic Places as a significant place of Black ethnic heritage and recreation. The course is only one of two in the state left today originally created during segregation for use by African American communities.

Scott Edwards, State Historic Preservation Officer with the State of Florida, and Jan Auger, General Manager of Golf with the City of Tallahassee, believe the course's historical significance makes the application strong.

"It's an important site because this area was developed as a recreational space for African Americans in the early [19]50s. Prior to that, on a golf course, African Americans had to learn to play the game as being caddies or working for the municipal golf course here in town," Edwards said. "They were restricted with a certain time or day of the week, so they just couldn't play whenever."

Today, the course enjoys a diverse clientele. Amateurs and enthusiasts alike: young, old, and as everyone repeats—diverse as the population of the city that claims it as their own. But when the course and surrounding park were created, in a time of the segregated South, the intention was to provide Black people a separate space for golf and recreation.

The City of Tallahassee created Southwest Park in 1953—announced as “a new park and picnic grounds for Negro citizens”—and added Jake Gaither Golf Course to it in 1956. Due to the social climate of the time, an air of controversy seemed to surround it in its early years. The course had a group of dedicated community members who pushed for the city and the county to create it, maintain it, and keep it as a fit public resource.

A Brief History of Golfing in the U.S.

In the 1800s, golf was a popular game in Great Britain, but for various reasons, including the U.S.’s opposition to the British in the war of 1812, the sport did not pick up steam on this side of the Atlantic until late in the century.

The game, on many accounts, was imported by men of Scottish heritage. John Hamilton Gillespie, “The Father of Sarasota,” and its first mayor, is credited with bringing the game of golf to Florida. He is said to have arrived from Scotland in 1886 to assist in family business endeavors. Among his long list of accomplishments in Sarasota, he is credited with establishing a nine-hole course in 1904, and arguably beginning the state’s love affair with the game.

Tallahasseeans weren’t far behind. By the early 1900s, golf links—at the time a term used to reference courses—were advertised by local hotels and at Monroe Park, which was situated behind the Call-Collins house. Known then and now as “The Grove,” the home was the site of the newly formed Tallahassee Country Club, also claiming access to golf links on its grounds at the back of the house.

By November of 1915, the Hill City Golf and Country Club was organized and announced in the local paper—with claims that Tallahassee “will not only be the possessor of an enviable country club grounds and golf course but will be the host during all of every winter of scores of tourists who seek the resorts with the golf courses.” The Daily Democrat went on to say that in comparison, the east coast [of Florida] offerings were inferior water-covered sandhills. The site is where the Capital City Country Club sits today.

Fast forward to 1924 when the Tallahassee Country Club purchased the Hill City course and then in 1935 gifted it to the City of Tallahassee, with rights to be the first on offer if the city decided to lease or sell the property. For the time between 1935 and early 1956, the course was known as the city’s municipal course.

Black people who were employed as caddies were restricted to using the course one day per week. They would also play early mornings before the course opened and, unofficially, after white players left.

But, in November of 1955, amongst increasing civil rights unrest, the U.S. Supreme Court banned segregation at public recreational facilities. Staunch segregationists suggested public facilities be sold or leased to private individuals as a means to protect them. Florida Attorney General Richard Ervin stated, "I think most everyone will recognize that Florida is not ready at this time for Integration of the races at public parks and playgrounds."

Soon after the ruling, in February of 1956, in a 4-to-1 vote, the city commission voted to lease the use of the Hill City course back to the (privately owned) Tallahassee Country Club for 99 years—at the rate of $1 per year. The Tallahassee Democrat reported that city records showed a yearly loss on the course's operation. Upon inquiry on whether or not the course would be open to the public, a country club representative stated that "any acceptable person would be allowed to play."

Looking for MORE trusted news? Subscribe to WFSU's Daily News to receive all the day's stories right in your inbox. Don't miss a beat!

As tensions were continuing to mount locally, Jake Gaither Golf Course was opened in late 1956—the same time local Black residents were boycotting the bus system in a movement started by two female FAMU students. The students were arrested after sitting in the ‘whites only’ section on a local bus route. But it wasn’t long before the course, built on low-lying land in the path of run-off from Indianhead Acres, was under water, rendering it unusable. After several years of higher-than-average rainfall, water had backed up from both Lake Munson and Lake Henrietta inundating five acres of the course.

In the months that followed the city, with help from the county, promised to repair the damaged course. A short while later, citing loss of revenue and limited use, the local governments talked about leasing the land to "any responsible group," with an interest in leasing to the State Board of Control. This didn’t sit well with community members who preferred to keep the course public. An inquiry from Black businessmen and people from FAMU about leasing the property was mentioned but faded from notice.

In a March 25, 1960 letter to the editor of the Tallahassee Democrat, a community group countered each of the city’s reasons for wanting to wash their hands of the responsibility of the course.

The letter pointed to the lack of playability of the course due to the flooded holes the city promised to address but, to this point had done nothing. Due to unplayable holes, golfers had only been paying partial fees, draining the course’s revenue. They also questioned whether ‘City Fathers’ had consulted the record of attendance of the grounds to confirm its popularity with area golfers.

They concluded, “We the citizens of Tallahassee are interested in this recreational facility and would like to see that it is maintained and kept in operating condition. We are also interested in golf and want to play the game, whether it be separate, Integrated or what have you. We just want to play golf."

In October 1960, after several attempts by Black leaders to propose a solution, and a reported lack of follow-through with the leasing of the land, the city authorized the first funds to redesign the course. In the following years, the city’s commitment to rebuilding the course hinged on Leon County’s mutual contributions.

By 1963, the course was reported to be in “top shape” by City Manager Arvah Hopkins, and work began on the park’s community center.

A record number of 9,000 players visited the course in 1970. However, the course was still plagued by flooding issues, which again forced its closure in November of 1972. It took four months to reopen the course with improvements. Jake Gaither Golf Course existed as the city’s only municipal course until the 18-hole Hilaman Park Municipal Golf Course (on Blair Stone Road) was opened in 1982.

Park officials have continuously lobbied for funds to maintain the course that had gone in and out of disrepair through the 80s and 90s.

Today the city is dedicated to Jake Gaither Golf Course. "It's important for the community. It's important for so many people that play here, that were raised here...It's entrenched in its history," said Auger. "We're proud of it and I don't think that's gonna stop."

Auger has seen her share of golfers around the city. As the city's General Manager of Golf, she’s had the opportunity to associate with many of the area's golfers, including young ones. She was instrumental in the fate of Kamaiu Johnson, who she noticed while he was swinging a stick outside his apartment (which sat on the edge of Hilaman), mimicking players on the course. Auger provided access and helped to find mentors for Johnson, an experience that those involved agree changed his life. Now, he plays golf professionally.

“Golf is known as a sport for wealthy people,” Auger said. “The people who play here [at Gaither] are senior citizens people of different backgrounds and all ages. It's just a really tight community."

She credits the Gaither course and its community with helping Kris Hannah, the first student of color on a golf scholarship at Florida State University, to succeed at the game. After quickly learning the basics at Gaither, Hannah moved over to the Seminole golf course where he was taken in by the staff forging a connection with the FSU and FAMU golf teams. After a successful career at FSU, he went pro in 2002.

He says he was "able to take it to the next level" because of the access he was given by the golf community and his mentors Leroy Kilpatrick, Willy Hudson, and Johnny Lee Brown. In their youth, Kilpatrick and Brown were caddies at Capital City Country Club. Kilpatrick became one of the top Black amateur golfers in the state through the late 50s and 1960s. In the 90s he was President of the Jake Gaither Golf Course Association and taught many of the area's youth fundamentals of the game.

"It's all about access," he said, "letting these kids practice for free, getting them clubs, that's everything because you never know what could happen."

The former-pro turned teacher is now a teaching pro at Gaither, where the city sponsors programs to teach kids the game.

"Jake Gaither—that's my root. I owe everything to Jake, itself, its spirit, to allow me to be able to do what I did professionally and now to reciprocate what I did to the youth, to teach everyone this wonderful game of golf," said Hannah. "It doesn't get any better than that."

Today, the Gaither course is known as a place where any person can enjoy an affordable, recreational game of golf—solo, or with family or friends. But because of its beginning, and significance in American history and culture, the State of Florida and the city have petitioned for the grounds to be officially recognized by the National Register of Historic Places.

The property will be evaluated on its age, its resemblance to its early inception, and its significance as associated with important historic developments, activities, or lives of people. 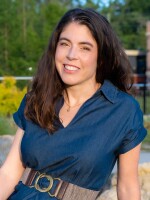 Patricia Moynihan
Patricia manages digital work at WFSU, which is a really hard thing to explain to people, because there is a lot that goes on in the digital world! Her work involves ensuring team needs are met regarding digital projects, marketing, and services. She graduated from Florida State University with a bachelor's degree in communication, specializing in media production, and later earned her master's degree in information management from the London School of Economics and Political Science.
See stories by Patricia Moynihan
Latest Stories
Related Content