A version of this story was first published by member station Vermont Public Radio .

It's a political insult that dates back to the 1800s: "He couldn't get elected dogcatcher."

President Trump even trotted it out last year to disparage Sen. Bob Corker, R-Tenn., with whom he was feuding at the time.

It's supposed to be a joke: an elected dogcatcher, really?

But it's no joke in Duxbury, a town in central Vermont, population 1,337 as of the last census. It may be the only jurisdiction in the U.S. with a dogcatcher subject to the will of the voters.

During the lunch break of the town's annual meeting earlier this month, residents were lined up in the Crossett Brook Middle School cafeteria for a $5 potluck put on by the town's historical society. Later the residents will vote on a variety of local ordinances and town offices.

Towne guesses he's held the post for about 15 years, although he hasn't really kept track. He gets paid $500 a year, mostly to make sure there aren't dogs running loose around town. It's a one-year term, so he gets elected at Duxbury's town meeting each year.

"When I first started doing it, I think it was holding up the town meeting because nobody wanted to do it," he explains. "So I said if it will get us along, I'll do it. And, plus, I had a Walker Coon Hound that was always out running. So, I figured, if somebody picked her up they'd have the number to call."

So not exactly a dog-eat-dog election.

There was one year though when Towne faced some potential competition:

"And I said, 'Good. Go ahead. These are the types of calls you're gonna get,'" recalled Towne, before explaining the nature of the position, which although it's described as dogcatcher, also includes taking calls ranging from "there's an ermine in my porch" to "there's these beef cows running through the woods."

"And at the end of it," Towne said, no one else ran for the post "because everybody else said, 'We don't want that.'"

But when it comes down to it, Towne really does like the job. "It's fun, interesting."

Towne guesses he gets 20 to 30 calls a year, and he says about half of them go something like this:

'You don't have to do anything, but I want you to know about it.'

'So don't write anything up or call anybody, but this is what's going on.'"

All joking aside, Towne takes his job seriously.

"It's basically...also for the animals," he says. "I have had to go and take some out of homes that were being not treated correctly and been left," he admits. "A few other serious calls were saying, 'dogs were biting multiple people.' You know, that's when ... I get serious on it."

"All I can say is all my dogs love Zeb," she says. "So, we don't have to look very far if they get loose. They end up at his house anyway."

Of course, a man can't live off a dogcatcher's stipend alone. Towne is something of a jack-of-all-trades who surveys land, does construction and works at Mad River Glen ski area. He also produces maple syrup from his 3,500-tap maple sugar operation.

As for that infamous insult, Towne says it doesn't offend him.

"No, because I can," he says. "I'm the only person in the country who gets elected as a dogcatcher. So, I'm awesome, I guess." 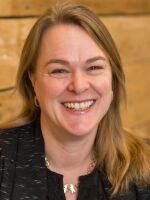 Amy Kolb Noyes
Amy is an award winning journalist who has worked in print and radio in Vermont since 1991. Her first job in professional radio was at WVMX in Stowe, where she worked as News Director and co-host of The Morning Show. She has been a VPR contributor since 2006, covering Lamoille County and the Northeast Kingdom. Amy has a B.S. in Broadcast Journalism from Syracuse University.
See stories by Amy Kolb Noyes
Latest Stories