A Marquette University molecular biologist is experimenting with growing rice in the Midwest.

In the U.S., most rice is grown in Arkansas and California. But with drought conditions in California and the uncertain impacts of climate change, scientist Michael Schläppi has been trying to grow the water-intensive crop in a Wisconsin lab and field.

"The main thing is that I'm testing whether they actually flower here, set seeds and the seeds can be harvested on time before winter, before it gets too cold. And then also to measure what the actual yield is," Schläppi says.

He slogged through more than 200 varieties of rice — from Australia to Uzbekistan — before hitting on the most promising few. He subjected those to real Wisconsin weather on the rooftop paddies he constructed outside his lab. Planting, this year, started in April.

"It's a lot warmer than last year. But they survived, they all survived. They flowered when they were supposed to flower. So they can do it," he says. "This line, which is a Russian line, is the one that I think we can grow here in Wisconsin."

One month later, Schläppi expanded his experiment by digging out paddies on a third of an acre on a farm 30 miles north of campus. Schläppi plunks his germinated seedlings in their watery new home. Their bright green shoots gently sway in the breeze. He wove experimentation into his design; Schläppi planted both seeds and seedlings and tested flooded and unflooded paddy systems.

Stephen Petro manages this 40-acre farm, a smidgen of which Schläppi occupies. Small-scale urban farmers cultivate the rest, growing vegetables and flowers to sell at market in Milwaukee.

Many of those renting land emigrated from Laos, where growing rice is a way of life. Petro says they're watching Schläppi's experiment with keen interest.

"A big thing for a lot of our farmers is there's a cultural component of bringing something that they grew up doing and that they haven't done ... maybe for 30 years back into their lives," Petro says.

The bulk of summer passes and September arrives at the farm. Dragonflies light on fully grown paddies.

Schläppi says despite an occasional leak and some weed encroachment, plants flowered and rice is forming. He hasn't harvested the crop yet, but Schläppi is already plotting to expand his experiment to a full acre.

"I should get about 8,000 pounds of rice on an acre, and this Krasnodarsky variety can do that," he says. "It's almost made for Wisconsin."

"This is what I do for a living is to try to understand the genetic attributes the different varieties that are needed for the future might have. Since the climate is becoming less predictable, it's hard to know what the farmers of the future will need in terms of the traits that will enable the crops to be productive and to provide a really healthy food base for this enormous global population," she says.

McCouch says scientists like Schläppi with his farmers in Wisconsin could play a crucial role in helping to provide food for that population. 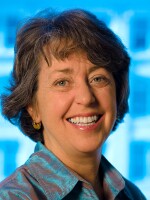 Susan Bence
Susan Bence entered broadcasting in an untraditional way. After years of avid public radio listening, Susan returned to school and earned a bachelor's degree in Journalism from the University of Wisconsin Milwaukee. She interned for WUWM News and worked with the Lake Effect team, before being hired full-time as a WUWM News reporter / producer.
See stories by Susan Bence
Latest Stories