In Spain's Election, Far Right Could Win First Seats In Parliament In Decades

Spain is heading for general elections on Sunday — its third in just four years. But this vote could be different. A far-right party is predicted to pick up some parliamentary seats for the first time since the country transitioned to democracy about 40 years ago.

Supporters like the Vox party's tough stances against immigration and feminism, and against the push for independence in the Catalonia region in northeastern Spain.

Critics say it has revived Spanish nationalist ideas that had become fringe after the fall of Spain's long dictatorship.

"They're increasing hate, racism, and a lot of things that were hidden," says María Bayó, 40, who is talking about politics with friends outside a bar in the outskirts of Barcelona, in Catalonia.

Bayó wants candidates to win who favor Catalonia's independence from Spain, a divisive issue. But she blames right-wing parties for railing against secessionists and immigration, while distracting from important problems like the lack of jobs and affordable housing. Spain's high unemployment rate, which hovers above 14%, is the top concern for most Spaniards, according to the Center for Sociological Research.

Originally slated for next year, Prime Minister Pedro Sánchez called early elections after his center-left Socialist government failed to get its budget passed in February.

As with both 2015 and 2016 parliamentary elections, no single party is expected to win an overall majority on Sunday. That could mean drawn-out jockeying among parties to form a coalition government.

With nearly 30% of voters saying they are undecided, the result is far from certain.

The latest polls suggest the incumbent Socialist Party could get the most votes but would need outside support — possibly from the leftist anti-austerity United We Can Party and Basque or Catalan parties — to stay in power.

Or conservative parties could instead win enough votes to form a governing coalition that could include Vox.

Political researcher Berta Barbet, at the Autonomous University of Barcelona, says either a left-wing or right-wing coalition government is possible.

"Our heritage, our freedom"

Vox promises to take power away from regional independence movements, push back against feminism, deport undocumented immigrants and build a wall to keep them out.

"We're going to make separatist parties illegal once and for all," said Vox leader Santiago Abascal to a cheering crowd at a recent campaign event. "Because your tax money shouldn't go towards ... political parties that want to destroy our coexistence, our heritage, our freedom, and all the best things that Spaniards have."

Vox is also appealing to voters who oppose a growing feminist movement in Spain.

In 2004, with pressure from feminist organizations, Spain passed a law intended to reduce domestic violence by making it easier for survivors to report their abusers. Vox wants to scrap the law.

In April 2018, Spain's feminist movement erupted with its own #MeToo moment: Five men who allegedly gang-raped an 18-year-old woman were charged with the lesser offense of sexual abuse, after a regional court ruled that no violence was involved. Hundreds of thousands of people took to the streets to demand a more robust rape law.

In January, Vox published a video of women asking feminists not to speak in their name. One of them says she doesn't want her partner to be criminalized for being a man.

A Vox supporter in the southern Spanish city of Seville, 48-year-old Juan López, told NPR earlier this year that he felt like "nowadays, you have to apologize for being a man."

Other politicians have also taken tougher, right-wing stances in the runup to the vote. The mainstream conservative People's Party leader Pablo Casado told reporters this month he wants to indefinitely suspend Catalonia's autonomy and impose direct rule from Madrid.

Rajoy called for snap elections in the region, which resulted in another pro-secessionist Catalan government that now seeks to negotiate with Spanish leaders a legal referendum to break away from Spain.

Vox has portrayed both the conservative and Socialist governments' handling of the continuing crisis as too "weak."

Warning against a hard right turn, Prime Minister Sánchez said in a debate with candidates this week that a vote for a conservative party could put "the far right at the wheel."

"This is a very threatening reality we need to avoid," Sánchez said. "I thought Trump wouldn't win, and he won; I thought Brexit wouldn't happen, and it happened."

Back at the bar in Catalonia, Bayó says she hopes young people get out and vote.

"We can't go back, and these politicians want to go back," she says of Vox.

Bayó adds that it is up to the youth to prevent Spain from going through what their grandparents went through more than forty years ago, under the fascist dictatorship of Francisco Franco. 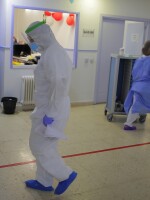